Fermented zoodles are going to be a staple in my summer meal planning! Zoodles are quite possibly my favorite paleo substitution idea EVER! I love pasta just as much as the next person, but I don’t love how I feel after a carb-heavy pasta meal. Zucchini noodles (zoodles) are a genius substitution for pasta and they always leave me feeling satisfied. Sometimes I’m convinced that it isn’t actually the pasta that I love, but actually the red marinara sauce and fresh herbs (and cheese) that go on the pasta. I am 100% a red sauce girl.

Since it seems you can ferment just about every vegetable known to man, I decided to try my luck at fermenting zoodles. I wanted to keep the recipe simple, so the fermented zoodles could be used as a base for cold pasta salad recipes this summer. Verdict: Zucchini noodles CAN be fermented. Yay! Bring on summer!

This post contains affiliate links, thanks for your support.

Until I made this recipe, I had been using a julienne peeler to make zoodles. I decided to up my game and invest in a vegetable spiralizer. Guys, if you’re going to make zoodles, get a vegetable spiralizer. It’s so easy and there is much less waste. I read a million different reviews and finally decided on this one. I like that the different blades can be  stored on the unit itself, so you don’t have to raid your drawers for the parts every time you want to use it. It washes up easily too!

Ok, on to the recipe:

First spiralize your zucchinis and add the zoodles to a large bowl. I chose to use the blade that would give me the thicker zoodles, as I thought they would hold up better when it comes time to tightly pack them in the jar. Sprinkle generously with sea salt and freshly cracked black pepper. I have no idea how much pepper I actually used in this batch. I just kept cracking it until the amount was satisfactory to me. I tend to go heavy on the pepper. Mix with your hands to distribute the salt and pepper evenly and then let sit for 20 minutes. The salt with help to draw out some of the moisture from the zucchini. This will eventually become part of your brine. Meanwhile, dissolve the sea salt into the filtered water and set aside for later.

After 20 minutes, massage the zoodles a bit so they release even more moisture.

Then it’s time to the pack your jar. Be sure to use a wood spoon or your fist to pack the zoodles down. You want to eliminate as many air pockets as possible. Pack the zoodles in until you have just enough room left for your fermentation weights. Then pour in your salt water brine until everything is covered and submerge under the brine. Depending on how tightly you packed the zoodles in, you may have some brine left over. Use a fermentation weight to make sure all of the zoodles are submerged in the brine. Cap with an airlock device or a lid and let ferment at room temperature for 21 days. You should notice some bubbles within the first few days, this means your zoodles have begun their fermentation journey. You may also notice an increase in liquid during the first week and then eventually the liquid level may go down. Be sure to monitor and make sure all of the zoodles stay submerged in brine. This may mean adding in some brine along the way. After 3 weeks, remove the airlock and cap with a solid lid. Store in the refrigerator.

Note: if using a lid and not an airlock, you will want to burp your jar a few times during the first to week to let the built up gas escape. I used the Pickle Pusher Fermentation Kit for this recipe. It’s works as a weight and an airlock. It also comes with the lid to use after you are done fermenting.

Fermented zoodles taste ok on their own but they really come alive as a base for salads!

I’ll share a fermented zoodle salad recipe with you soon! 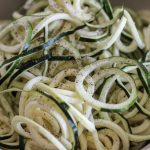